Sometimes it’s hard to talk about the in-between places. The places that feel like lim 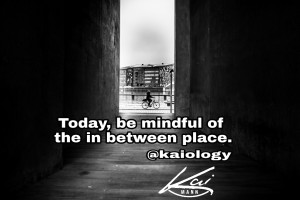 bo. You’re not where you used to be but you’re not quite yet where you’re headed. You have faith enough to know that you’re close but the GPS seems to keep re-routing you. It’s the place where everything you once knew doesn’t work anymore, and the things you’re learning haven’t been tested enough to be proven and you’re still trying to figure out how to use them. That place where the person you used to be is taunting you for its equal return and the new you is lurking just close enough on the inside that at times it could be considered out; but it looks to be waiting for an invitation to do so. And, it’s not that you haven’t offered one, its impression is as if it’s awaiting the alignment of some magical space in time where everything needs to meet just so.

So let’s just say that right now ” I feel crazy” most of the time…lol. The new person you’re becoming sometimes feel like a suit that may not quite fit just yet. While you’re still gaining muscle to fill it in just right, and although you’re sure that you can fill those shoes, at the same time you’re doing that thing that most little girls do in their mothers heels, try to teach yourself to walk in them.

If I can explain it in detail I’d tell you that it’s that place where certainty kind of teases you from day to day. Where the ground that you walk on feels a little shaky and in spite of the foundation previously poured its as if the structure beneath your feet is somewhat changing. So much is happening all at the same time that concentration seems to escape you from time to time and you begin to act in ways that you never have before. Often asking yourself “Who was that?” You’re changing, morphing, and transfiguring into the ‘new’ you and your emotions at times can run high as you’re seeking and searching to figure it all out. You feel like those cartoon characters that are shape-shifting, a little painful and out of sorts. Meanwhile a new class is in session and it begins at ground zero. Its days before Kindergarten starts how many, you don’t know, but all you know is that you’re ready for first grade.

You’re realizing that every dimension has a process of levels and every time you get to a new dimension you must start all over from the beginning and it feels weird. A bit uncomfortable, and unnerving because you don’t know what to expect. It’s like being a freshman all over again, you’ve got to get acclimated, learn the ropes, and then you can begin to truly succeed just as you did on the last dimension.

Even still, I had wished that I could go on a 30 day retreat and that someone like Mr. Miyagi would show up and walk me through the lessons of life hand-in-hand so that I could surely be ready for the fight. Right now if anyone asks, my go to is the “Karate Kid” as the match to my hero’s journey. Previously like Daniel I too wanted to skip the whole ‘Wax on…Wax off” part and go straight to the fight but it doesn’t work that way. As you can see, Daniel got hurt. Even though he did, he won because the principles had been instilled in him.

Remember hero, that the journey is built on consistency. Opportunity or chance comes right at the moment that it is supposed to. So if you’re in the in between space, work the process, do your “Wax on…Wax Off” exercises and stick to the trail even when you feel like you’re going to fall off. When you step on to that platform to that next level you’ll be glad that you did.

Why You Can’t Let Go