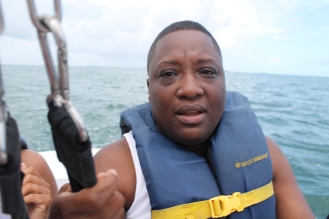 You ever feel like all that you are and all that you know is changing underneath your feet? I’ve heard for many years about the Creator being the potter and we’re the clay but today, I am totally feeling it.  I feel like I’m being stretched, pulled, and shaped into something brand new and most times it is very uncomfortable but I know that it’s for my good.

Those around me may not know that something is going on looking from the outside in, but my spirit is changing.  For about the last nine or ten years I’ve asked the Creator to give me the ability to discern other people’s spirits. I asked of this because I knew that I needed the ability to do so if I were to move forward in life quicker and not be at a standstill or a loss because I had closed my eyes to the world around me. In my past life it took me longer to recover from not seeing people and things for who and what they were because I had walked through life blindly and when the shoe dropped I had acted as if I didn’t see it coming. To me, the spirit of discernment is just the ability to see things for what they are, make the best decision possible, and act upon that decision.

I have seen what I believe are distinct instances into the characteristics of some people around me and it is hard sometimes to not want to allow a person chance after chance to get it right, especially after you’ve told them who you are and what you will and will not allow. Often they make light of it or disrespect it. Not blatantly but in a get over it or yourself type of way by ignoring your words and continue to do the same as before you so stated.  I will them to see me and to get who I am but it is not always so, I move on. In my discernment I recognize that I don’t have time to wait for those around me to get it because I’m trying to get it myself.  My thought is, even if you don’t get it, respect it, and respect me. I came to the conclusion that not all, but many paths in my life I’ve allowed others to decide how they wanted to see me and I then acted accordingly or never corrected them. Now, life is about being better to me and finding out what feels right for me. I say for, and not to because they are not always the same. What’s right for me doesn’t always immediately feel good to me.

I never understood the concept of saying “so and so is trying to hold me back,” well I don’t know what the circumstances surrounding anyone else has been but I believe that the people holding me back could possibly be me. I say it could possibly be me because although there are instances where I’ve noticed the forcefulness of others to try to pull me into their world; I’ve had to resist the temptation to do so. And when I couldn’t or shall I say didn’t, I was left to pick up pieces of myself. It can be hard because it either feels like you’re being insensitive to their needs, or you’re being selfish, or that you’re being rude by not indulging them. Trust me, I don’t use the term forceful lightly either. When people don’t respect your boundaries or who you are, it feels like they are forcing you to either conform to what they want and not what you need. It is a pulling away of your soul. The sad part is that I don’t think that people recognize that they are tearing you away from your soul in order to change you into what they prefer. At least I’d rather think that they don’t know because the other thought would be way too much to bear.